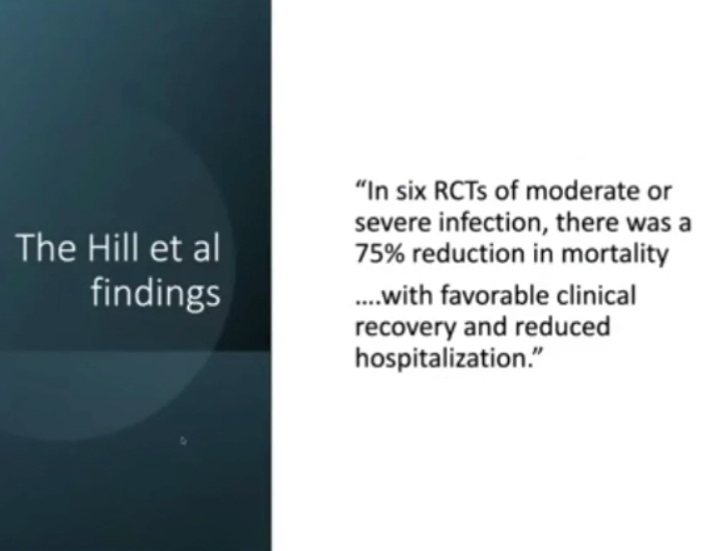 The findings were “In six RCTs [Randomized controlled trials] of moderate or severe infection, there was a 75% reduction in mortality ……. with favourable clinical recovery and reduced hospitalization, with ivermectin.”

It is not usual to “make recommendations when we do systematic reviews, we just present our conclusions”.

Randomized controlled trials “take ages” to conduct, and Dr. Lawrie was keen to have ivermectin urgently considered for use as many people were said to be dying from covid.

Important that, as Dr. Hill tweeted on Feb. 2 2021 “Mass vaccination plus ivermectin treatment for anyone testing virus positive is the way forward”. So it was not a choice of either ivermectin or vaccination, but both.

The Hill et al report’s conclusion that “larger RCTs are needed…. before rigourous evaluation of the clinical benefits of Ivermectin can be undertaken” is at odds with the lack of such “rigourous evaluation” before the global mass roll-out of the vaccines!

The author list (Hill et al) showed un-declared conflicts of interest – WHO-Unitaid1*Unitaid’s connections are shown on their site https://unitaid.org/#en, a charity, contributed but was not listed.

Here is part of a Zoom discussion January 18 2021 between Dr. Lawrie & Dr. Hill. Dr. Hill’s meta-analysis had just appeared… in Dr. Lawrie’s opinion the conclusion did not match the evidence.

Lawrie: “So who helped you, whose conclusions are those on the review that you’ve done? Who’s not listed as an author that actually contributed?”

Lawrie: “It needs to be clear, I would like to know who are these other voices that are in your paper, that are not acknowledged? Do Unitaid have a say, do they influence what you write?”

Hill: “Unitaid has a say in the conclusions of the paper, yeah.”

Lawrie: “Ok, so who is it in Unitaid then, who is sharing that he was giving you opinion on your evidence?”

Hill: “Well, it’s just the people there, I couldn’t start naming” Lawrie: “Unitaid is just a charity, is it not a charity that actually has” Hill: “yeah”.

Lawrie: “so they have a say in your conclusions?”

A further analysis in France found that “it was highly likely that there were 2 and possibly a third “shadow authors” involved in manipulating the text, specifically to under- mine the positive evidence on IVM”.

We are showing an edited extract of the video. The full video is on the World Council for Health website.

Dana Loesch also spoke with Dr. Lawrie about her conversation with Dr. Hill – and the suppression of her work. You can watch that extract from The Dana Show here.